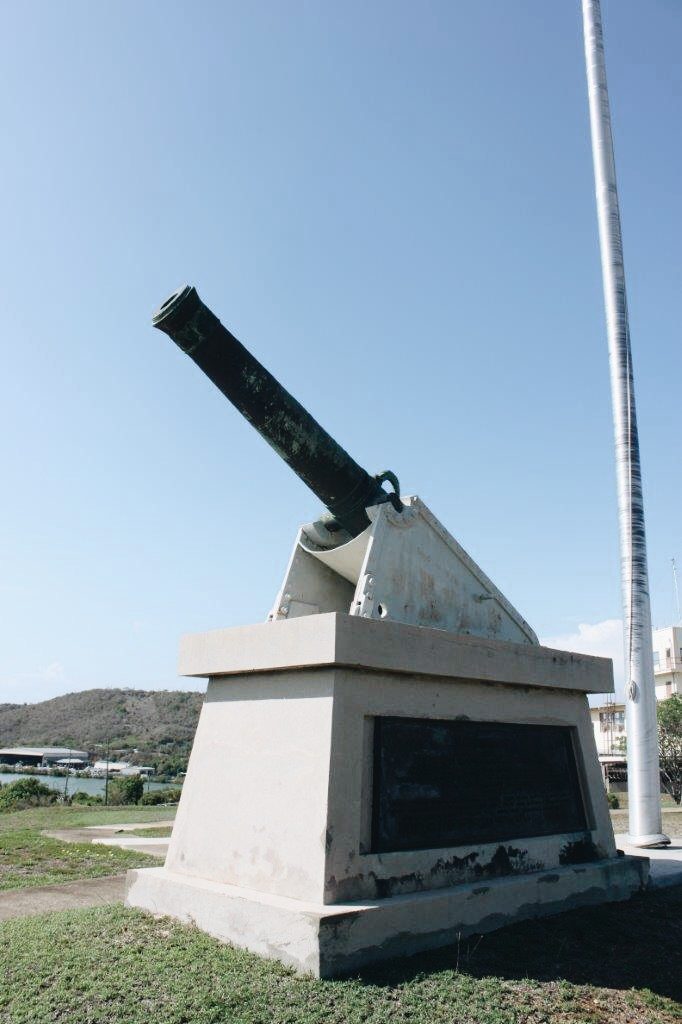 The monument is labeled as Facility 549.

The base of the monument contains a plaque that reads:

UNDER THE COMMAND OF LIEUTENANT COLONEL ROBERT W. HUNTINGTON

WHICH DISEMBARKED AT THIS POINT JUNE 10, 1898 THE FIRST UNITED STATES

The cannon is a bronze muzzle-loading cannon that measures 13.7 feet long and is 18 inches wide at the breech. An inscription along the base ring of the cannon indicates that it was made in by a person named Maritz in 1748. Jean Maritz Sr. developed a new way of constructing bronze cannons in 1740. Molten metal was generally poured into a form around a spindle. This created the hollow bore. Maritz Sr. cast the cannon as solid bronze, laid the cannon horizontally, and then drilled the bore into the metal. This led to greater accuracy and safety, as the bore was perfectly centered in the weapon and there was a uniform thickness of metal on each side of the explosion. Drilling the bore reduced air resistance and a smaller explosive charge could propel the same projectile. Jean Maritz Sr. died in 1743, so the this cannon was likely designed and built by Jean Maritz Jr. 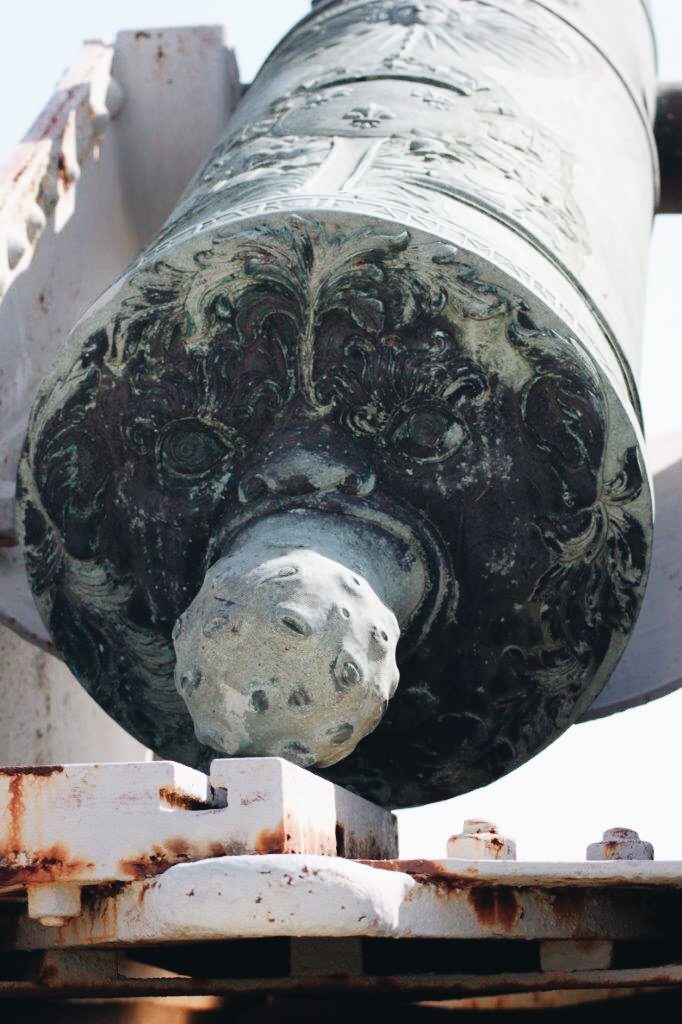 Twenty-four-pound cannons have the face of Bacchus depicted on the breech molding (A.Thomas).

The muzzle is decorated with leaves. At the top of the chase, is an inscription that reads “le Bourbon,” possibly indicating that this cannon was named “The Bourbon.”  Below is the motto “Ultima Ratio Regum” which means “The Last Argument of Kings.” Below that is an inscription, which reads “Louis Charles de Bourbon, Comte d’Eu, Duc D’Aumale,” possibly meaning the cannon was dedicated to Louis Charles du Bourbon, Count d’Eu and Duke of Aumale, who served as the head of French artillery from 1736 to 1755. Below that, and just above the reinforcing ring, is the detailed raised crest of Louis Charles de Bourbon, with three fleur-de-lis, leaves, stars, flags, banners, and cannons, under a crown.

The top reinforce ring is covered in flowers and leaves. The second reinfornce of the cannon has a plain trunnion and two handles carved like sea serpents. At the top of the first reinfornce is an inscription that reads “Nec Pluribus Impar, ” which translates to “Not Unequal to Many” above a sunburst. This inscription, together with a sunburst, was the emblem of Louis XIV, the “Sun King” of France. Below that is the detailed crest of Louis XIV. The first reinforce vent is still open and is surrounded by flames. The edge of the breech has the maker’s mark, indicating that Jean Maritz manufactured it in 1748 in Douai, France.  The trunnion indicates that the cannon weighs 5,730 livres (medieval French pounds), which translates to 6,184 pounds by today’s standards. 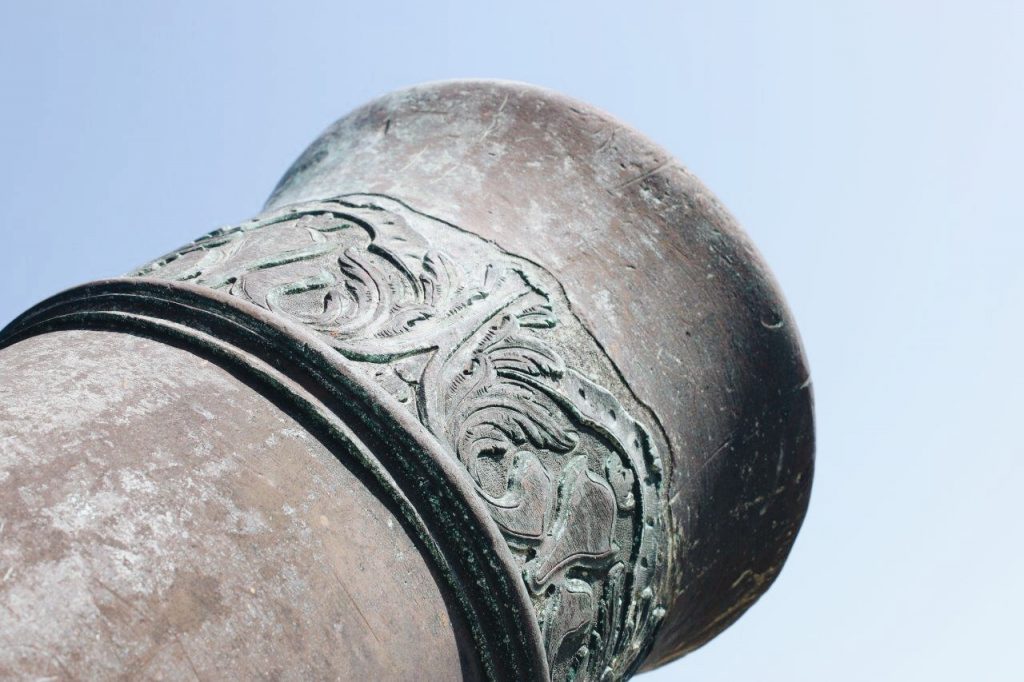 The top ring is covered in raised flowers and leaves (A.Thomas).

There is very little information on how the cannon came to Guantanamo Bay. It may have came to Cuba as early as the French and Indian War (1757-1763), as Spanish King Charles II tried to come to the aid of his cousin French King Louis XV. The American Revolution was another opportunity, when a combined French and Spanish force attacked Pensacola in 1781. Another possibility is that it was brought to Cuba by French forces fleeing from the revolution in Haiti (1791-1804). It could have even come to Cuba as late as 1808-1815, when Napoleon controlled both Spain and France.

Once the cannon was in Cuba, it most likely came to Guantanamo Bay from Fort Toro, which was a Spanish fortification in the northern portion of Guantanamo Bay. The Fort was thought to have had six muzzle-loaded cannons at its disposal and frequently fired at U.S. Navy ships in the Bay. As the Spanish-American War ended in 1898, the American military began to collect various antique weapons to take home as war trophies, and the Navy requested three of the cannons from Fort Toro be brought to the U.S. Naval Academy at Annapolis. Before those weapons could be collected, however, the store ship Glacier (AF-4) landed and confiscated weapons described as “two of the finest pieces of bronze cannon.” Tipped off by the British Consul, the Commander of Guantanamo went to investigate. When detained, the captain of the Glacier stated that he was collecting the weapons for the Secretary of the Navy, but refused to say if he was under direct orders to do so.  It is possible that during this time, the Commander of Guantanamo Bay had confiscated the two cannons and was awaiting further orders. The monument was dedicated to the Marines who lost their lives in the Battle of McCalla Hill, in February of 1906. 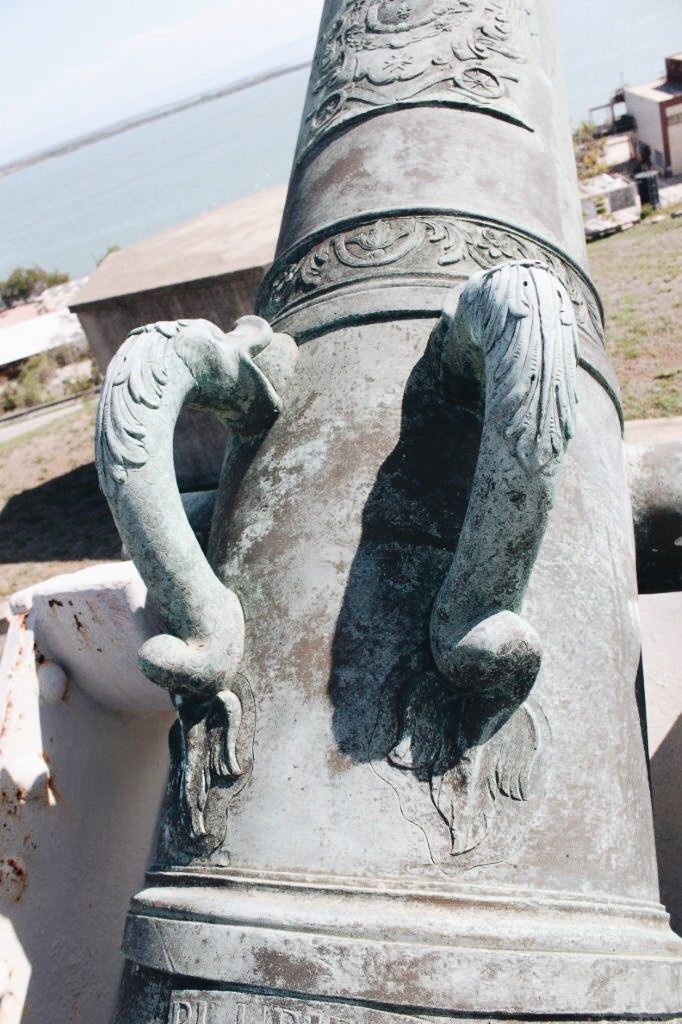 The first reinforce of the cannon is rather plain with two handle shaped like sea serpents (A. Thomas).

In the October 24, 1908 edition of the Army and Navy Register, a display of trophies from the Spanish-American War is described outside of the State, War, and Navy Building in Washington, D.C. (now the Eisenhower Executive Office Building). Among the trophies described is one cannon made by Jean Maritz, and it appears to be a sister to the McCalla Hill cannon. It reads: “It strikes one as odd, for instance, to come across an old French cannon, such as the one captured at Santiago in 1898, and which was made at Douay (sic), France, in 1748, by one Jean Maritz. It is a gem of bronze work and bears all sorts of emblems, decorations and insignia, including its title ‘Le Farouche’ (The Fierce), its Latin motto, an emblem of the House of the Bourbons, the French crown, the French coat of arms, the motto of Louis XIV, and a blazing sun. It is altogether ornate for an instrument of destruction, proud of its ferocious title.”